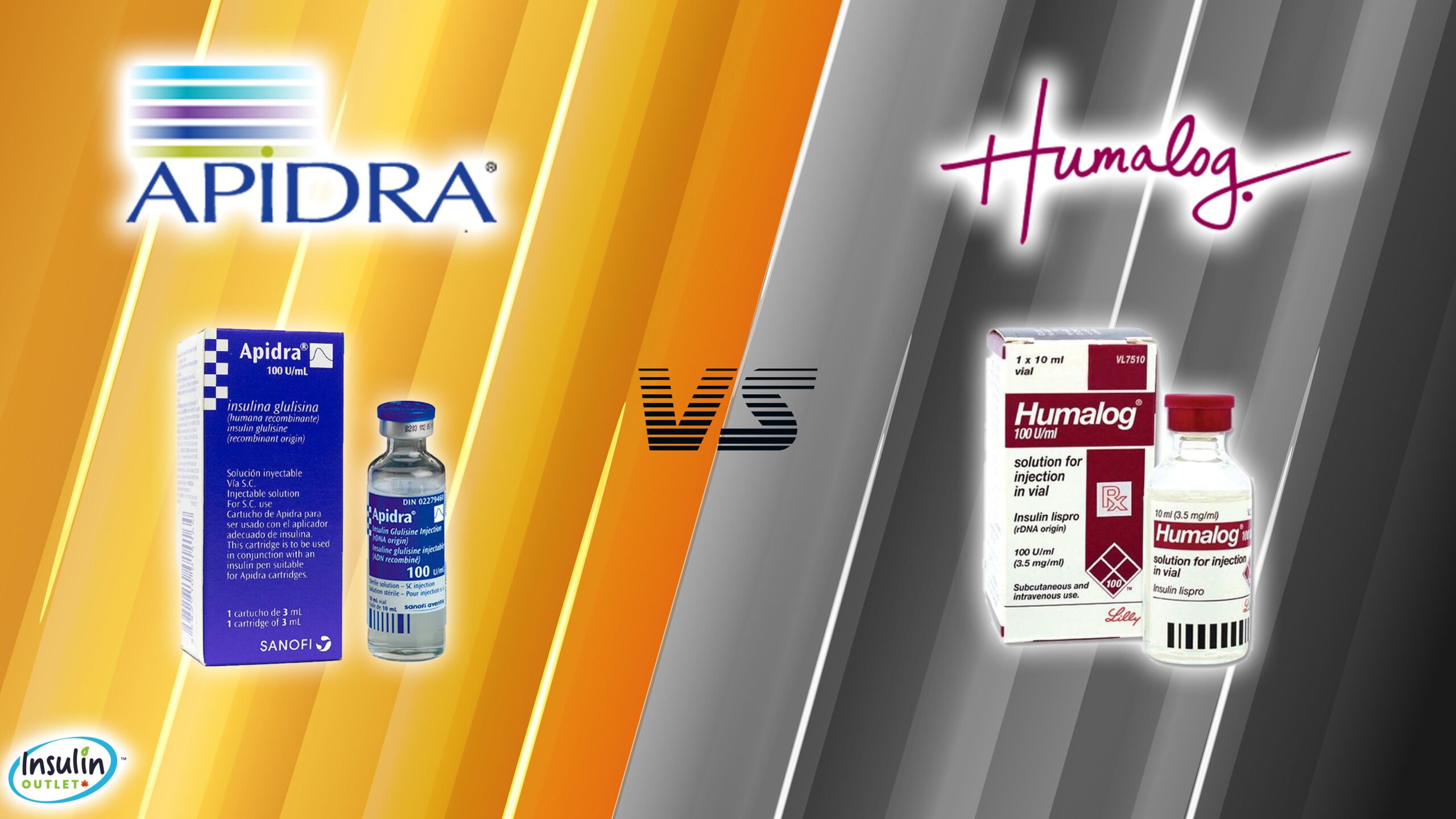 In today’s insulin matchup, we have two very common diabetic medications facing off with each other: Apidra vs. Humalog! Insulin therapy constitutes a standard treatment for individuals with Type 1 or Type 2 diabetes. There are a various kinds of insulin on the market and they vary with how quickly they work in regulating blood sugar levels. The variations are also based on how the insulin peaks and how long it lasts in the system.

In this regard, rapid-acting insulin is a group of insulin medications used to counter the impact of glucose increase, due to food consumption or other factors. It aids in the digestion and absorption of food to maintain blood glucose levels and avoiding hyperglycemia. In normal circumstances, the pancreas in the body releases adequate amounts of insulin to aid in the absorption of glucose in the blood. In the case of diabetes, rapid-acting insulin mimics the effect of the pancreas and thus helps imply glycemic controls.

These medications aid in reducing high blood sugar levels in individuals with Type 1 and Type 2 diabetes. These medicines are usually taken in combination with long-acting insulin. Since they are rapid-acting insulin analogs, they are meant to work quickly compared to other insulin medications. Your doctor may also prescribe other diabetic medications to compliment your insulin regimen. While both belong to the rapid-acting insulin category, they cannot be used interchangeably as they have differences amongst them.

This article highlights a comparative review of Apidra and Humalog, its function, administration, benefits, and possible side effects.

Apidra, a rapid-acting injectable insulin medicine, which has insulin glulisine and is used to treat Type 1 and Type 2 diabetes in adults and children above the age of 4. It is meant to start working after 15 minutes after injection and peak after one hour.

Apidra is usually prescribed as a part of a treatment regimen that incorporates an effective exercise program, a proper diet plan, and regular blood glucose testing. If any of these factors are changed, the blood glucose is also affected. It is advised to take Apidra fifteen minutes before eating or twenty minutes after taking food.

How Does Apidra Work?

The primary purpose of Apidra, an insulin glulisine injection, is to lower the blood sugar level. It is a colorless solution intended for subcutaneous and intravenous use. Apidra is available through vials, SoloStar Pens and cartridges.

The main point of difference in Apidra and Humalog is their composition. While the active ingredient is Insulin glulisine (100 IU/mL), the inactive ingredients include trometamol, sodium chloride, metacresol, polysorbate 20, sodium hydroxide, hydrochloride and water.

It works as a substitute for the natural insulin produced by the pancreas. Apidra mimics the insulin that the body makes in response to food consumption in individuals who do not have diabetes. Thus, Apidra is formulated to work quickly when food is consumed to regulate the blood glucose levels that increase due to the food eaten.

How is Apidra Administered?

Among the rapid-acting insulin category, Apidra is considered to have the longest dosing window. The dosing window between pre-meal and post-meal for Apidra is 35 minutes. Patients have the flexibility to administer the medicine before or after their mealtime.

Apidra administration protocol is tailored to individual needs. The daily insulin requirement usually varies between 0.5 to 1 unit/kg/day. However, in the event of factors like illnesses, stress, or changes in meal intakes or exercises, the insulin dosage may be altered. Hence, it is essential to monitor blood glucose regularly when the patient is receiving Apidra.

For subcutaneous administration, Apidra is administered 15 minutes prior to a meal or 20 minutes after and is usually given in combination with long-acting insulin.

Possible Symptoms of Apidra Use

The most commonly reported side effects of Apidra include, low blood sugar levels and itching or a mild skin rash (usually near the injection site). Some individuals experience mild thickening or skin hollowing on the injection administration site.

Some less common but serious side effects include difficulty in breathing, erratic heartbeat, swelling of face, tongue or throat and hands or feet, weight gain, increased thirst and urination, numbness and weakness in muscles, leg cramps or constipation.

If you experience any of these symptoms, it is better to consult your healthcare advisor right away. Apidra is advised for adults and children over four years of age. It is not known if it is safe for administration in children under the age of four and is hence not advised.

For more information on Apidra, check out the article Is Apidra Right For Me?

Like Apidra, Humalog is also a rapid-acting insulin medication used for lowering blood sugar levels in individuals with Type 1 and Type 2 diabetes. The medicine begins working as soon as fifteen minutes after it is administered subcutaneously to lower the blood sugar level, and after one hour, it has maximum impact on the body. It is advised to take Humalog 15 minutes before you eat or just after a meal.

How Does Humalog Work?

Humalog has insulin lispro, a rapid-acting insulin analog, which works after around fifteen minutes it is taken. Its maximum effect can be experienced 45 to 150 minutes after Humalog is administered. Its effect diminishes after almost 3.5 to 5 hours. It mimics the regular human insulin to lower the blood sugar level in diabetic individuals.

It is a clear and colorless liquid. While the active ingredient is insulin lispro, the non-active ingredients include glycerin, distilled m-Cresol, zinc, sodium phosphate, hydrochloric acid and water for the injection.

How is Humalog Administered?

Each 10mL vial of Humalog contains 100 units of insulin lispro for every 1mL. Humalog can be given subcutaneously and through intravenous injections administered in a vein by a healthcare provider.

Humalog is available in multiple forms, for instance, vials for insulin syringes or pumps. These vials are available in 3 mL and 10mL with the same insulin concentration of 100units per 1mL. It can also be administered via an insulin pump that delivers insulin dose continuously or specifically before mealtimes.

The administration protocol is personalized to individual needs. The standard starting dose is four units, which may be around 10% of the long-lasting insulin. However, in the event of factors like illnesses, stress, or changes in meal intakes or exercises, the insulin dosage may be altered. Hence, it is essential to monitor blood glucose regularly when the patient is receiving Humalog.

Possible Side Effects of Humalog

Some of the common side effects of Humalog include itching, redness or swelling at the site of injection. The skin may also thicken or depress at the injection site.

Some less common side effects of Humalog include ketoacidosis that may cause increased thirst, loss of appetite or drowsiness. Other possible side effects are headache, irregular or increased heartbeat, confusion or dizziness, anxiety or nervousness, nausea, trembling, numbness, tiredness, weakness or sweating.

If you experience any of the side effects, particularly rapid pulse, heavy breathing or a loss of consciousness, you need to seek medical attention right away.

Apidra vs. Humalog: Similarities and Differences

Both Apidra and Humalog are rapid-acting insulin used to treat type 1 and Type 2 diabetes in individuals. Both have a rapid onset window of 15 minutes and have a peak effect after one hour of administration. The effect of both medicines lasts between two to four hours.

In addition to the constitution, Humalog and Apidra also differ in terms of who can use these medications. Apidra is usually prescribed to adults and children above the age of 4 for treating Type 2 diabetes.

On the other hand, Humalog is prescribed to adults and children having Type 1 diabetes. It is not yet known if Humalog can be used for children below the age of three to treat Type 1 diabetes. Additionally, adults with Type 2 diabetes can also use Humalog.

5 pens for $159.99
Previous Post Sliding Scale Insulin Therapy; How It Works
Next Post Ozempic vs. Metformin; Can They Work Together?