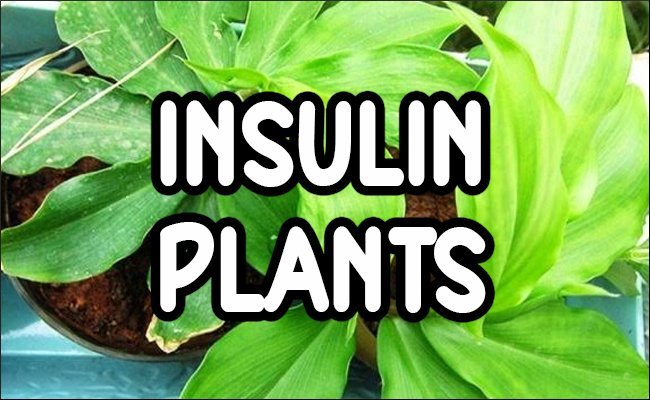 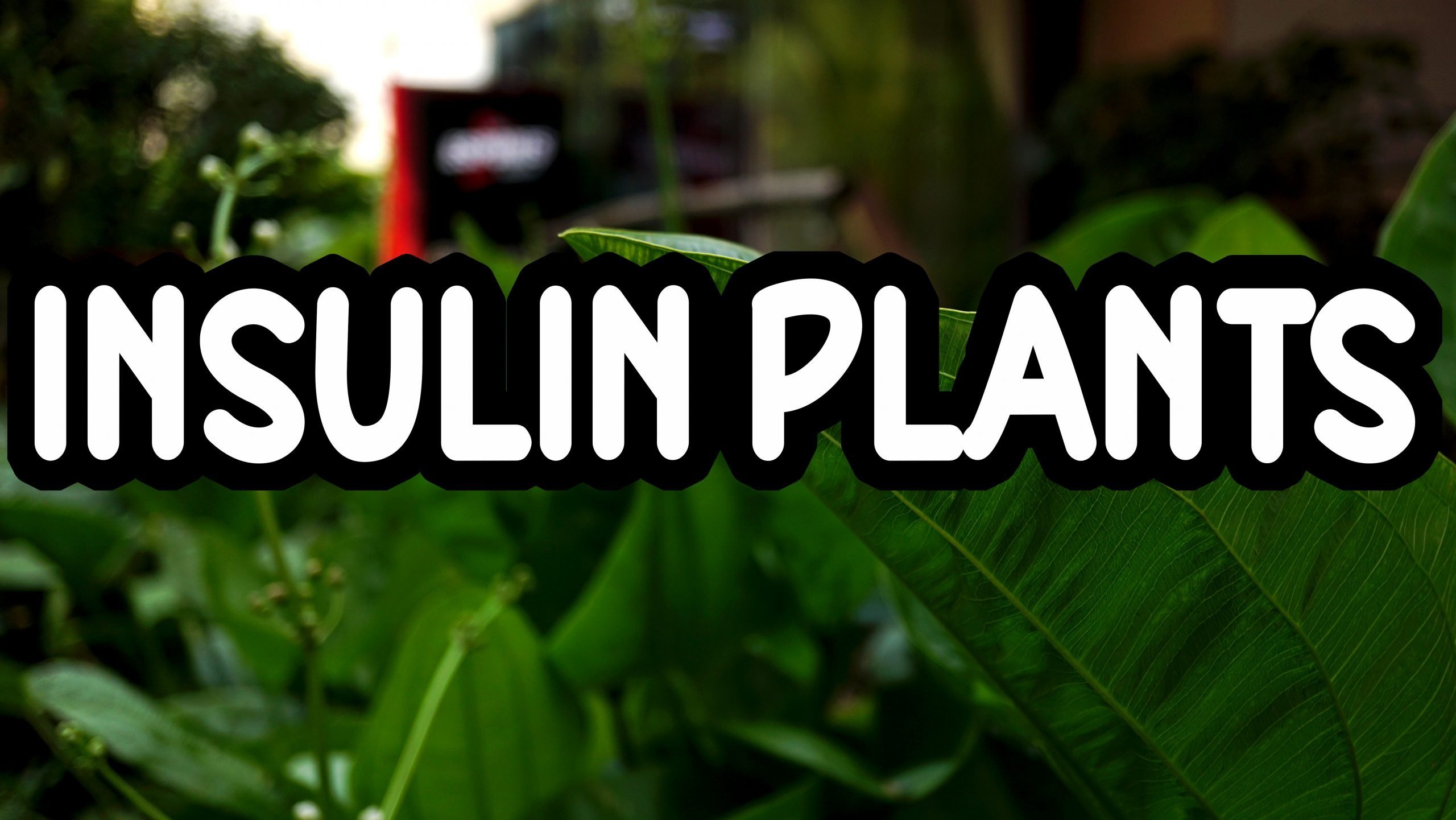 Recent studies have found that insulin plants shows promise as a natural, herbal way of alleviating diabetes symptoms as well as improving other health conditions. Currently, a synthetic version of the human hormone insulin is used to treat patients with diabetes. In order to better understand the hot topic of insulin plants, it is important to mention what exactly diabetes is.

Diabetes occurs when the pancreas produces insufficient levels of insulin. It can also happen when the body’s cells cannot properly use insulin to metabolize glucose. A decrease in insulin sensitivity is called insulin resistance. Diabetics use insulin vials and pens to inject themselves with the proper dosage, to maintain blood glucose levels. It is important for diabetics to understand the differences amongst of insulins, as unintentionally mixing insulin medications (for example, Humulin and Humalog) can lead to serious consequences.

Over time, higher blood sugar levels lead to severe complications in the body. This can include organ failure, blindness, limb amputation, increased risk of stroke and heart attack, and an overall reduction in life expectancy by an average of 15 years.

What are the Two Types of Diabetes?

Type 1 diabetes is often called juvenile-onset diabetes because it typically manifests in children. It is most commonly triggered by an autoimmune reaction in which the body’s immune system attacks insulin-producing cells in the pancreas. Genetic defects and viral infections can lead to this reaction. Type 1 diabetes cannot be prevented but can be managed.

Type 2 diabetes is often called adult-onset because it most often manifests in adults. It is linked to poor diet, obesity, and aging. Around 90% of diabetes patients have type 2 diabetes. Type 2 diabetes can be treated, managed, and in some cases even reversed.

Diabetes is sometimes called the “silent epidemic” and is responsible for over a million deaths per year worldwide.

WHO reports that the number of diabetes cases has quadrupled since 1980, and the rate continues to increase, with the most significant increases in low to middle-income nations. Today, over 460 million people live with diabetes, which is projected to be 700 million by 2045.

The Center for Disease Control and Prevention (CDC) in the United States expressed in 2020 that 34 million Americans have diabetes or more than 1 in 10 people. Additionally, 88 million adults, or more than 1 in 3, have prediabetes, and most are unaware that they have it. Youth both in the US and globally has become more susceptible to both types 1 and 2.

The two types of diabetes are treated and managed in different ways:

Patients with type 1 diabetes are treated with the drug insulin. This is a manufactured version of the human insulin hormone that is synthesized by a multi-step process. Managing type 1 diabetes is done by monitoring blood sugar levels and self-administering insulin through injections several times a day to keep blood sugar levels within safe ranges. This helps reduce diabetes-related severe complications.

Type 2 diabetics are treated similarly to type 1 diabetic. However, type 2 diabetes can also be managed and treated by changes in diet, exercise, and smoking cessation, reducing diabetes-related symptoms. In some cases, lifestyle changes can stop or even reverse the condition of type 2 diabetes.

Experts agree that, especially in adults, there is much room for improvement in managing and treating both types of diabetes.

What is the Insulin Plant?

The “insulin plant,” scientifically named costus igneus nak, is related to plants in the ginger family. It grows to be 2-3 feet tall with attractive flowers and 4-6 inch leaves arranged in a spiral pattern. This arrangement has led to some of its common names, including Step ladder and Spiral flag.

The insulin plant thrives in tropical climates and is native to South and Central America. It was recently introduced to Southern India, where it is often used as an ornamental plant. Its leaves are also used as a dietary supplement to treat diabetes, and this is how it began to be called the insulin plant.

The insulin plant’s leaves are rich in protein, iron, and antioxidants.  It also contains phyto-compounds that simulate the metabolic action of insulin in the body when ingested.

Claims of the Insulin Plant

The main interest surrounding the insulin plant is centered on the treatment and management of diabetes. However, additional studies have investigated the antioxidant and other potential therapeutic properties of the insulin plant.

Multiple studies have been conducted to evaluate the claimed anti-diabetic effects of the insulin plant.  One of the most notable was a cross-sectional human study performed in India and published in the Journal of Clinical and Diagnostic Research.

In this study, diabetic patients consumed either one fresh insulin plant leaf or one teaspoon of shade-dried leaf powder per day for at least one month in conjunction with other treatment modalities. This study concluded that type 2 diabetics who regularly consumed insulin plant leaves (while using other essential treatments) proved that it could provide glycaemic control. Oral hypoglycaemic drugs and non-allopathic therapies were successful in controlling blood sugar levels which were previously uncontrollable. Consuming insulin plant leaves did not result in diabetic complications or adverse side effects. From day fifteen, glucose levels were in control.

Further, the patients in the study continue insulin plant leaf powder supplementation since it is beneficial for glycemic control and appears to protect them against diabetic complications.

While the study authors noted that a controlled trial with a larger sample size is desired, the results of this study showed promising results in the use of ingested insulin plant leaves as a method of treatment and management of diabetes and alleviating symptoms of other conditions.

The anti-diabetic effect of insulin plant leaves continues to be tested in diabetic patients. Additional studies continue to reveal the role of the insulin plant in treating and alleviating various other diseases, which opens up new areas of clinical research. Further, this paves the way to explore further the compounds responsible for the therapeutic effects, which will help to understand better their mechanisms of action, some of which are described below.

These studies demonstrate that compounds within the insulin plant have antioxidant properties that can destroy free radicals and toxins, protect bodily cells, and improve the immune system.

In addition to the insulin plant’s antioxidant properties that can destroy free radicals and toxins in the body’s cells, as described above, ethanolic extract of insulin plant leaves was found to have anti-proliferative and anti-cancer potential. 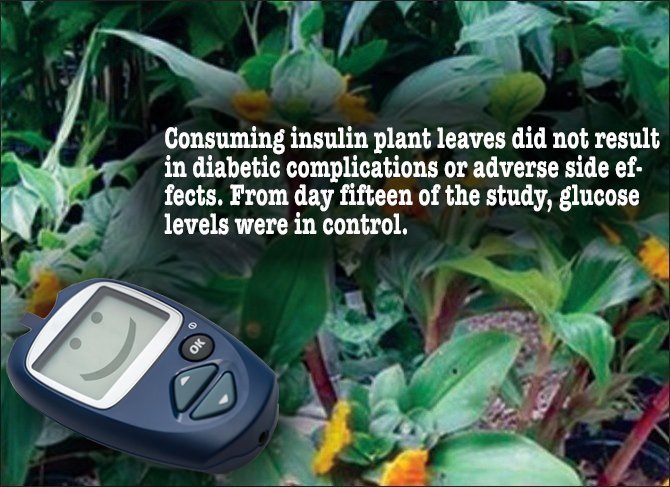 Additional studies have concentrated on the potential anti-microbial and anti-bacterial properties of the insulin plant.  Methanolic extract from the leaves showed high levels of anti-bacterial activity, protecting the body from both gram-positive and gram-negative types of bacteria.

Other extracts of the stem and flower exhibited maximum inhibitory activity on the growth of a range of tested microbes.

In addition to the health properties described in the sections above, the results of other preliminary studies have suggested that the insulin plant may have additional therapeutic properties that can improve digestion, liver, and bladder function, alleviate sore throat, and reduce high blood pressure and asthma symptoms.

An elevated body glucose level, or blood sugar, is the hallmark of diabetes. This can lead to serious side effects and even death. The rate of diabetes has continued to increase for the past several decades, with over 460 million people worldwide living with this disease.

A manufactured version of the human hormone insulin is used to treat patients with the most severe type of diabetes. This involves the patient monitoring their blood sugar levels throughout the day and self-injecting doses of insulin to maintain a safe blood sugar range.

The “insulin plant” is a tropical plant native to South America. Since being transplanted to India, it has been used as a dietary supplement to treat diabetes and other medical conditions.

Studies have shown that insulin plant leaves and other parts can reduce the symptoms of diabetes. One of these studies highlighted a human cross-sectional survey performed in India.

Additional studies have shown that extracted compounds of the insulin plant appear to possess antioxidant, anti-cancer, anti-microbial and anti-bacterial, and other therapeutic properties.

The results of these studies must be further evaluated and revalidated by additional studies and clinical trials. However, the studies show promise for the therapeutic properties of the insulin plant, particularly in treating diabetes.