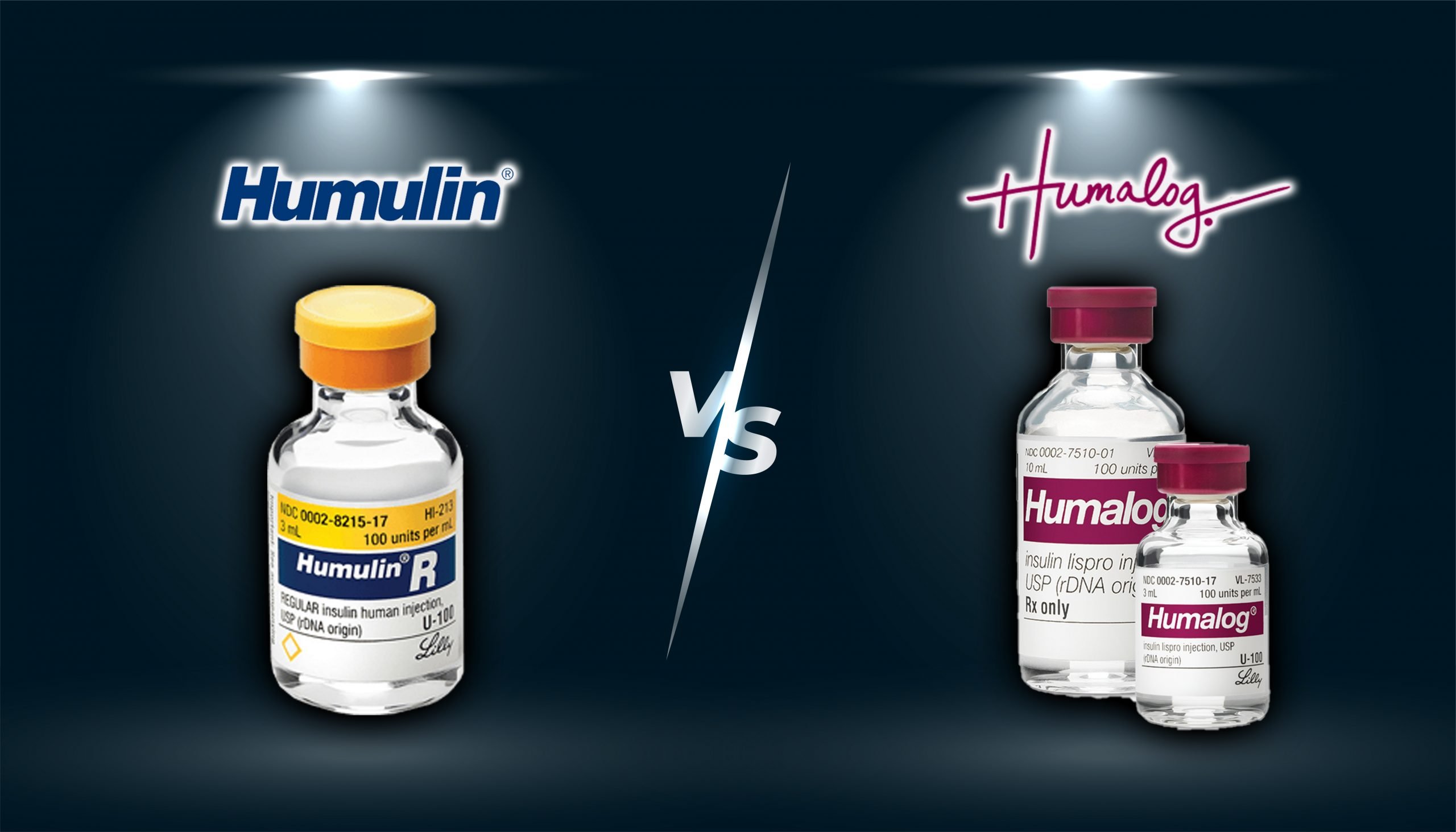 Two of the most popular insulin medications are Humulin and Humalog  These medications have been around for a long time, but they are used for different applications. Both of these products are very popular in diabetic communities around the world. They have been on the market for quite some time and have become household items in many diabetic households. Although they sound very similar, they do have their differences. In this article, we seek to explain the differences between both and how they are used to treat patients who suffer from diabetes.

What is Humulin and Humalog?

Doctors use these medications to reduce blood sugar in people who have diabetes. Insulin is a natural hormone found in the pancreas. This hormone is produced by beta cells and helps to convert glucose into energy for the body. Without insulin, glucose cannot be converted into energy, and the effect of this is that glucose (sugar) will begin to build up in the body. This build-up also leads to a lack of energy. Suffice it to say that too much glucose can lead to serious health complications such as

These are just a few simples examples of hypoglycemia. However, it should be noted that health complications can arise in a variety of ways that are not mentioned above. Many diabetics use insulin in their daily routine to manage their diabetes and blood glucose levels. To provide patients with insulin, doctors inject them with medications like Humulin or Humalog to control high sugar levels in diabetics.

This is why diabetic patients are advised to seek their doctors’ advice before using any type of medication. Upon visiting your doctor, ensure you have done research on both products, so you can ask the proper questions and receive assurable answers from your healthcare provider. As for both drugs, we do know that Humalog works much faster than Humulin. Once it is injected into the body, it starts to work within 30-90 minutes, and the patient will begin to notice the effect. Whereas with Humulin, it may take as long as 3 hours before the effect is felt.

With that out of the way, let us review both medications individually.

Humalog is a rapid-acting insulin produced in analog form. This medication works very rapidly to improve glycemic control in patients who have Type 2 diabetes. Humalog is recommended 15 minutes before or after your meal.

Humulin is a man-made form of natural insulin similar to the naturally occurring insulin in the pancreas. This medication is also meant for people with Type 2 diabetes. It is used to improve glucose levels in exactly the same way that natural insulin works. It breaks down blood sugar and converts it into energy. Humulin is available in vials, pens and cartridges.

Similarities Between Humulin and Humalog

The best spots to inject these medications include

Differences between Humulin and Humalog

Humulin is an insulin isophane drug that works quite rapidly once it is injected into the system. It takes approximately 30 minutes for the medication to reach the bloodstream and it begins working almost immediately. However, Humalog works much faster, as it takes half the time Humulin takes to start working.

Another difference is that Humalog is not an insulin isophane but is considered a insulin lispro. It takes just 15 minutes to get to the bloodstream and should be administered at least 15 minutes before or having a meal.

Different Forms of Humalog and Humulin

Humulin and Humalog come in different forms, and in this section, we will explain the different variations of both.

Humalog is a medication that contains insulin lispro  This type of insulin is a fast-acting analog version. In medical terms, analog simply refers to a man-made version of a drug. So for people whose bodies cannot produce natural Insulin in sufficient doses, Humalog can be administered to raise insulin levels in their pancreas. 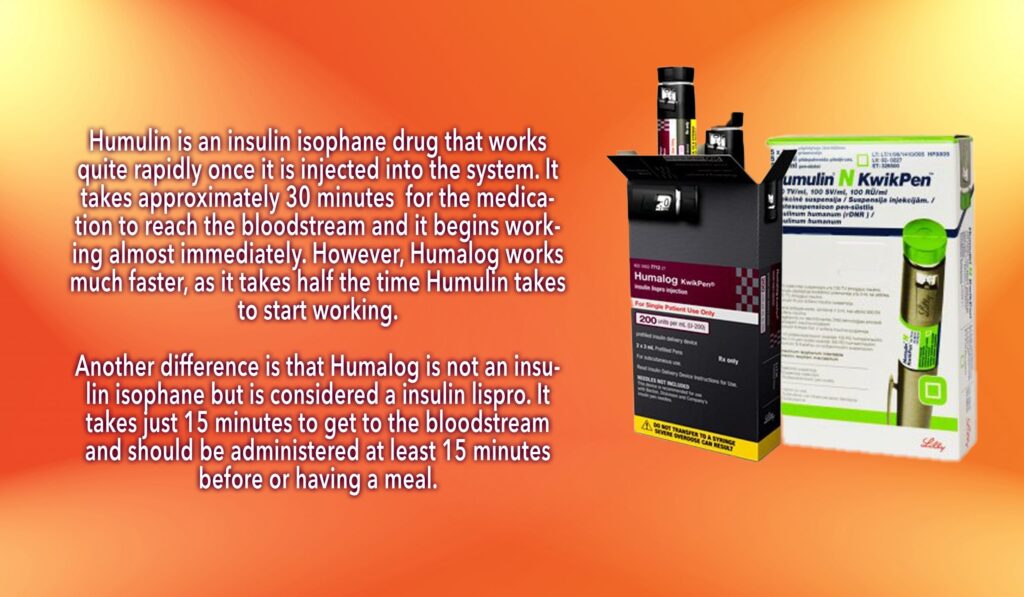 Then you have what is called Humalog mix, which refers to a combination of the normal insulin lispro and protamine, which is another form of insulin lispro that stays in the body for a long duration.

Humalog is mainly sold in liquid form as a subcutaneous injection that is given under the skin. Being an intravenous injection, for it to work, it has to be injected into the vein.

It comes in several vial sizes. There are vials ranging from 3-ml to 10-ml sizes. Then there is a much larger size of 100 units per ml which is the U-100 version  You can use insulin pumps used to deliver continuous insulin doses or manually administer it through a syringe.

There is also another form called the Kwikpen. This is basically a prefilled injection that looks like a pen. It is sold in 3-ml sizes, and they come in two different strengths. U-100 and U-200 insulin units. Humalog also has a smaller version called Humalog Junior.

The pen is sold along with a cartridges that contains the insulin. So from the cartridge, you can load the pen with the shot before inserting it into your vein.

Humulin comes in different forms, including vial forms that are used with syringes. Vials may come in 3ml or 10ml sizes of Humulin. They also come in prefilled disposable injection pens called Kwikpens with each pen containing cartridges full of the drug.

As for the forms of Humulin, we have the 70/30  suspension.  Vials sold with this combination come in 3ml or 10ml combinations. But there are rarely other types of combinations besides this one.

Risks and Side Effects of Humulin and Humalog

Humulin and Humalog chase different side effects in users, ranging from mild to severe side effects. Here are some of the known side effects recorded.

Some of the mild side effects users experience when they use Humulin or Humalog may include injection site reactions (redness, itching, pain, swelling), lipodystrophy (pitting around the skin area, skin thickening, swelling of the feet, hands, ankles and weight gain.

Some examples of serious side effects some users may experience include hypoglycemia (low blood sugar), hypokalemia (low potassium in the blood), and possibly serious allergic reactions.

There are several side effects associated with these medications, and in most cases, no two users will experience the same reaction. Some patients may even experience hands and foot swelling or shortness of breath. Combining them with other drugs may bring about worse reactions too.

This is why you should contact your doctor should you begin to notice adverse reactions when you start using these medications.

Are Humulin and Humalog Effective?

Both medications are not only effective, but they are also safe. They are approved by the FDA for the treatment of Type 1 and Type 2 diabetes.

And every since they were approved and released for use, many victims of Type 1&2 diabetes have come to rely heavily on them. Besides the fact that they are easier to use, they also work very fast, which is a big deal, especially for those suffering from severe diabetic reactions. 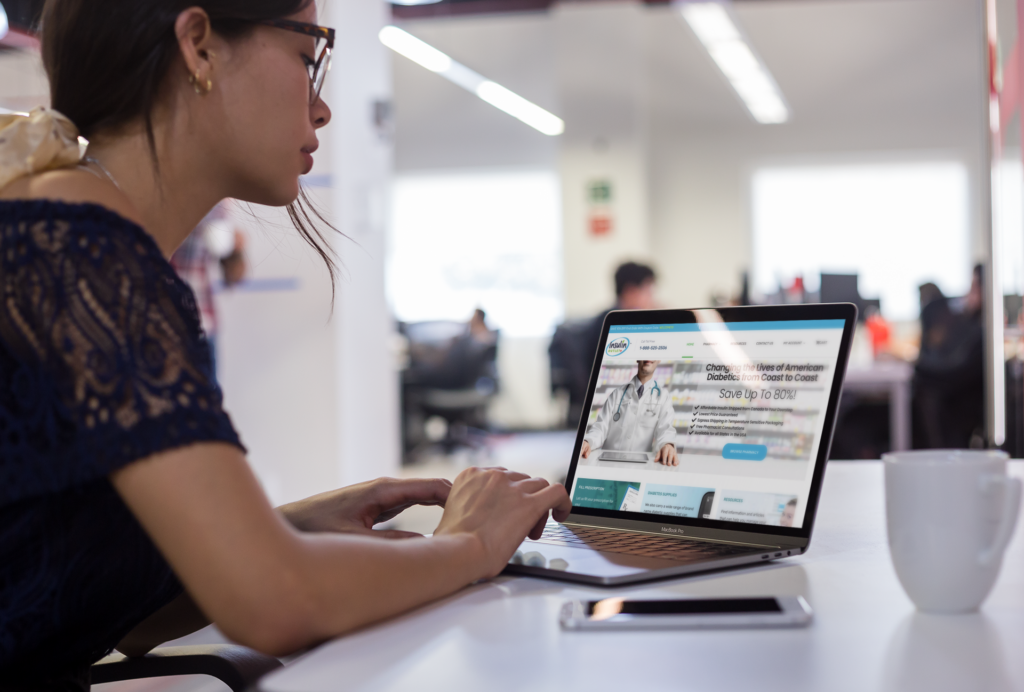 The Cost of Humulin and Humalog

Both medications come at different costs to different people, depending on a whole range of factors. How much you pay for Humulin or Humalog will depend on your location, insurance plan, and pharmacy.

To save yourself hundreds and thousands of dollars on insulin medications, be sure to use safe and trusted prescription fulfillment services, such as Insulin Outlet  We offer the exact same products you would buy at your local pharmacy but at a fraction of the price!

Humulin and Humalog have branded names for insulin medications used for Type 1 and Type 2 diabetes. Although they both sound very similar, they serve different purposes as their usage time varies. The difference between them is that Humulin is an Insulin isophane drug while Humalog is insulin lispro. Despite their difference, they serve the same purpose of breaking down blood sugar to keep it under control. If you must use any of them, please do so by the doctor’s recommendation and do not resort to self-medication. If you begin to notice any reactions, inform your doctor as quickly as possible.